Notes on Birds Hope that these PICTURES  of the birds  from my visits to Mauritius are going to be helpful. I  have provided a brief summary of the common birds of Mauritius, as we think that it is helpful to know which of the birds that you see in the first few hours, or even days, of arriving are so common as to be of no special interest, and which are more worthy of note. For identification, we used (Chamberlain's) Birds of the Indian Ocean Islands by Ian Sinclair and Olivier Langrand (1998), which we found invaluable; we have used the common names from this book in these notes. Although the authors recommended contacting the Mauritian Wildlife Foundation for advice, we met staff from the Foundation who made it clear that the Foundation did not have enough staff at present to offer advice to visitors. We also enjoyed reading Golden Bats(Flying Foxes) 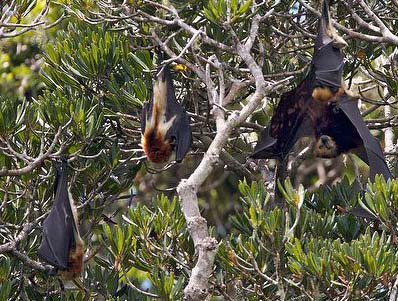 by Gerald Durrell (1977), which is an entertaining account of the author's visits to Mauritius in the early 1970s to assist in conserving the

Pink Pigeon  and the Mauritius Kestrel

Red-whiskered Bulbuls, Common Mynahs, House Sparrows and Feral Pigeons are very common throughout Mauritius. Indeed, we saw Red-whiskered Bulbuls everywhere. Spotted Doves, Zebra Doves, Mauritius Grey White-eyes, House Crows, Madagascar Fodies and Village Weavers are common, particularly in or near built-up areas. Common Waxbills are also common in suitable habitat. The six species of pigeons and doves, only five of which are described in Birds of the Indian Ocean Islands, can be confusing. Pink Pigeons are, of course, large and very rare. Next in size are the Feral Pigeon, the Spotted Dove and the Madagascar Turtle Dove. The latter two species both have spots on the back of their necks, but the patterns on their tails are distinctive when they are flying. The smallest two doves are the Zebra Dove and the Laughing Dove - the Zebra Dove's stripes are usually quite distinctive, while the Laughing Dove has a general pale pink and blue appearance, not unlike a small Madagascar Turtle Dove, but much bluer.